Australian Ninja Warrior star Fred Dorrington says he’s lucky not to have a permanent spinal cord injury after a horrifying accident during training for the show.

The climbing instructor, 31, confirmed on Monday he’d dislocated his T12 and T11 vertebrae four days earlier after a ‘bad fall’. He underwent surgery on Sunday.

He shared a short video to Instagram of his feet moving in a hospital bed, and said it was ‘an incredibly grateful sight to see’ as things could have been much worse. 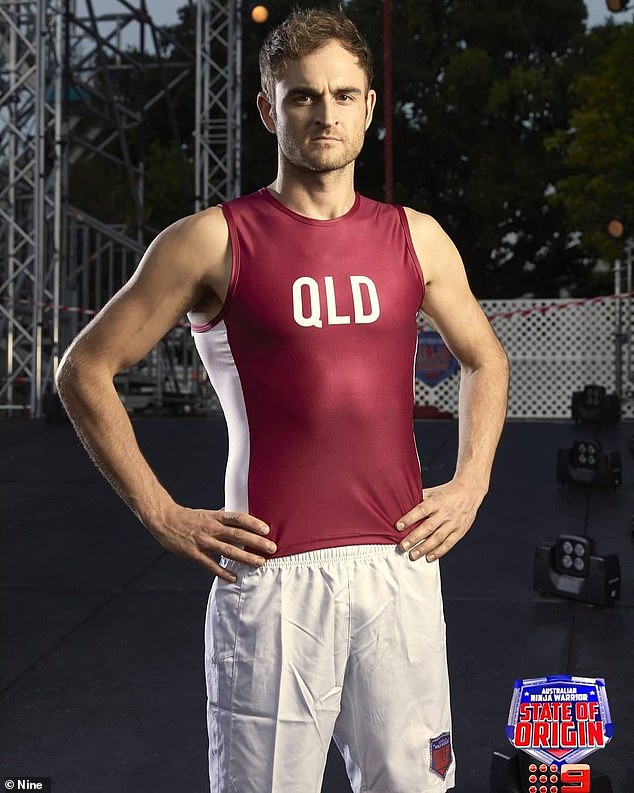 ‘It’s been an incredibly painful and uncomfortable situation to be in, both physically and mentally,’ he wrote.

‘I’m so glad to say surgery went well, and I’m now sporting a heap of screws and rods in my spine. I’m finally able to sit up and move around, despite the soreness and stiffness, and the pain is way less.’

He explained that in most cases an injury such as his would result in permanent spinal cord damage, but he was lucky and ‘a full recovery is on the way’.

Despite avoiding life-changing injuries, he said he was still ‘completely devastated’ because he won’t be able to compete in Ninja Warrior later this year. 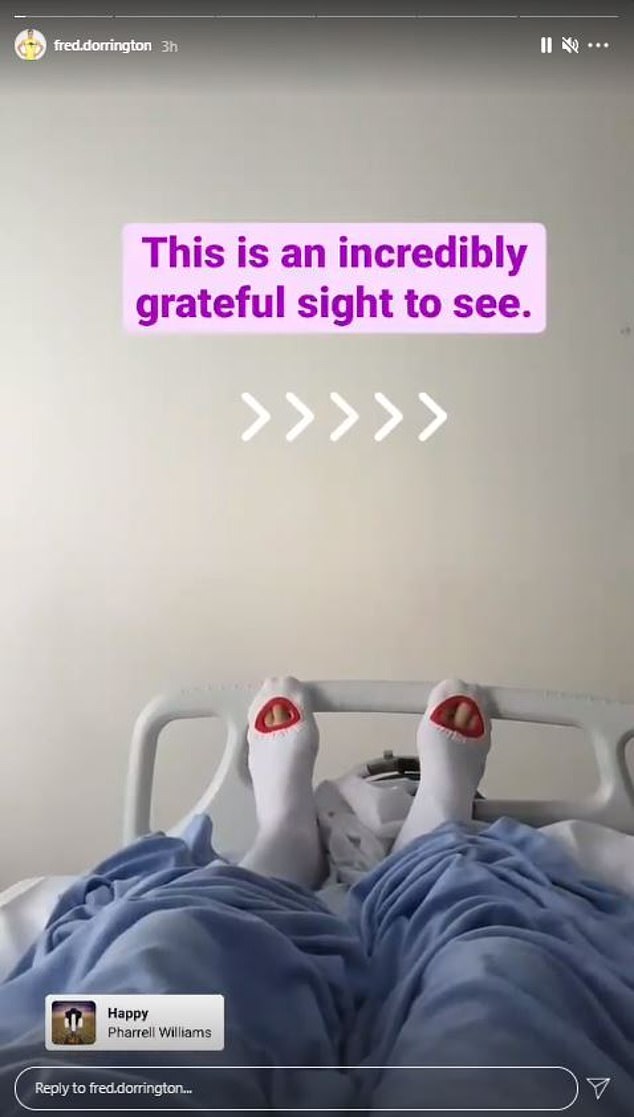 Lucky: The climbing instructor, 31, shared a short clip of his feet moving with the caption ‘This is an incredibly grateful sight to see’, before explaining what happened after taking a ‘bad fall’ in training 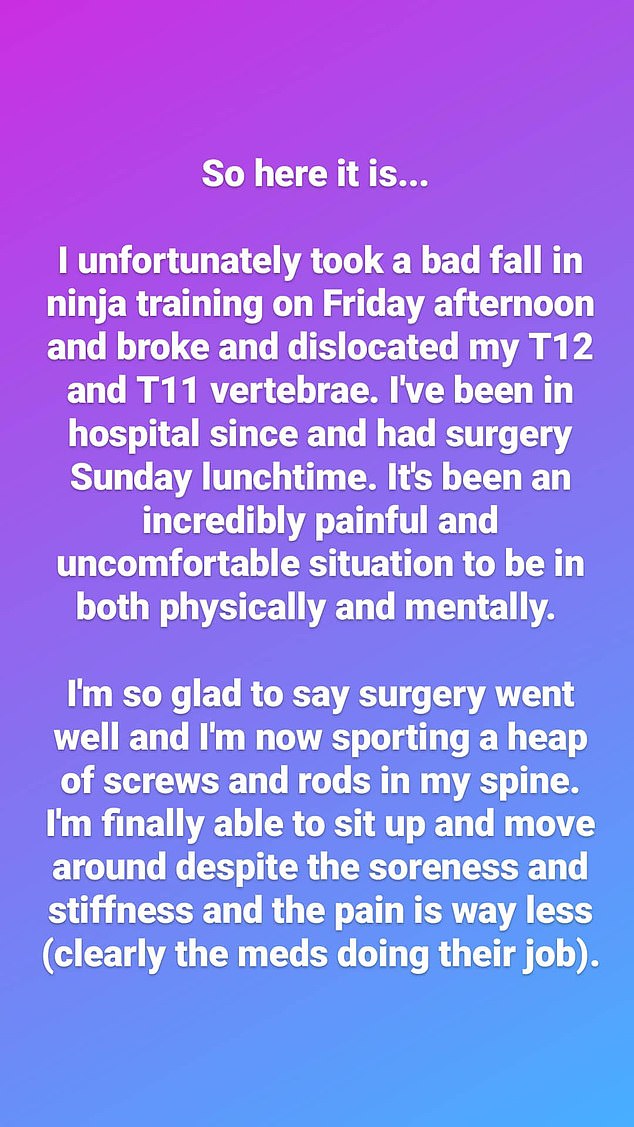 Bad fall: Fred confirmed that surgery went well, and that he’s finally able to sit up and move ‘despite the soreness’ 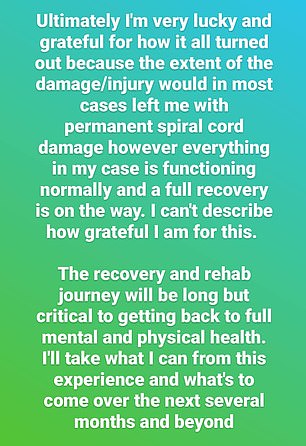 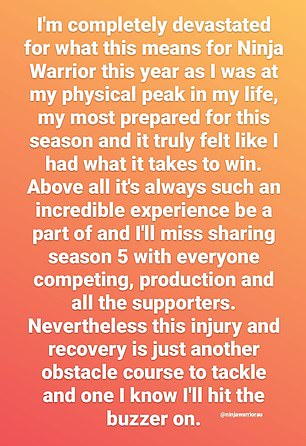 Road to recovery: Fred said his rehab journey will be ‘a long one’, as he shared his devastation that he won’t be taking part in season five

‘I was at the peak in my life,’ he said. ‘My most prepared for this season, and I truly felt like I had what it takes to win.’

While the fall was certainly a major setback, he said he was grateful to be surrounded by supportive friends and family.

‘Adversity is key to growth, and I know I’ll come out stronger and better from the chapter the lies ahead,’ he concluded. A true ninja! Fred has appeared on both the UK and Australian versions of the show, including the State of Origin special in which the four best ninjas from each state compete against each other

Fred has appeared on both the UK and Australian versions of Ninja Warrior, in addition to the State of Origin special which pitted the four best ninjas from each state against each other.

Fred represented Queensland for the 2020 State of Origin in August, alongside Rob Patterson, Skye Haddy and Ryan Solomon. They were eliminated on night two.

He had appeared on Ninja Warrior season four early last year and made it to the grand final – but shockingly fell on the eighth obstacle. 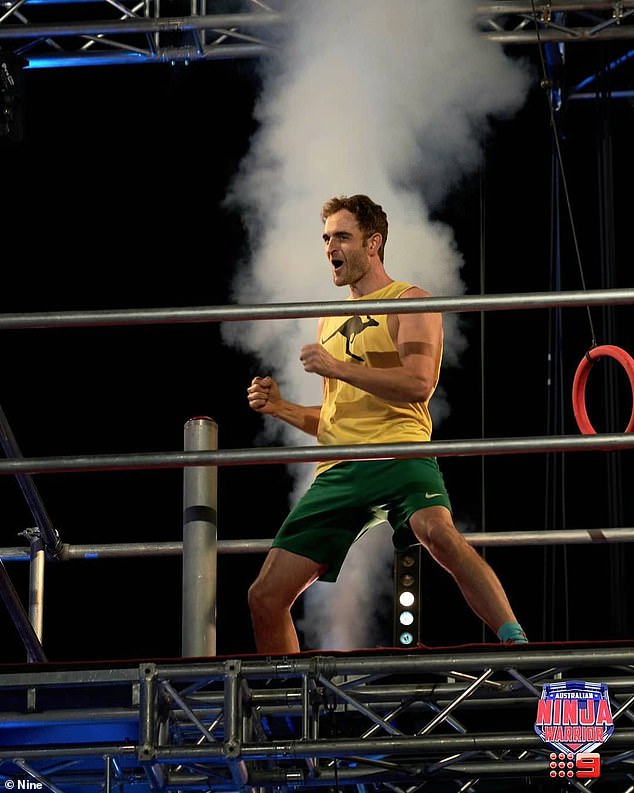 Unlucky: Fred had also appeared on Ninja Warrior season four early last year, where he made it to the grand final – but shockingly fell on the eighth obstacle

A Painful Lesson for the Chiefs: It’s Hard to Repeat as Champions