The future of Dancing On Ice has been thrown into question after Jason Donovan was forced to quit the competition on Sunday due to a back injury.

The departure of the former Neighbours star, 52, is the latest in a string of blows, after Joe-Warren Plant, Billie Faiers, Denise Van Outen and Rufus Hound all bowed out of this year’s show, prompting viewers to call the 2021 edition ‘cursed’.

A source revealed that Dancing On Ice is now hanging on by a thread as production will struggle to fill the two-hour ITV episode slot and could be ‘forced off air’. 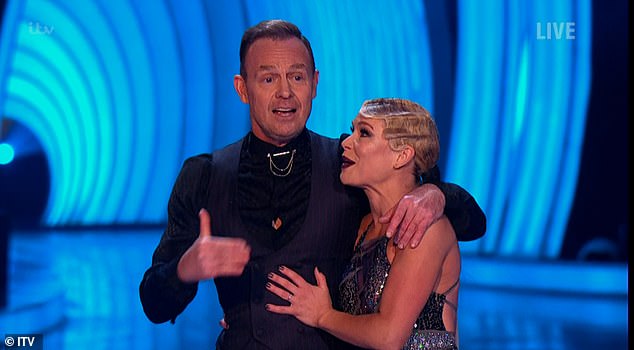 Shocking! The future of Dancing On Ice has been thrown into question after Jason Donovan was forced to quit the competition on Sunday due to a back injury (pictured last week)

They said to The Sun prior to Jason’s exit announcement: ‘It’s already a stretch making a two-hour episode of a TV show in a pandemic with a full cast.

‘But if any more pull out they will struggle to fill the slot. They’re already panicking about numbers because the celebrities are dropping like flies.

‘If Jason pulls out for good and there’s another injury, they could be forced off air.’ 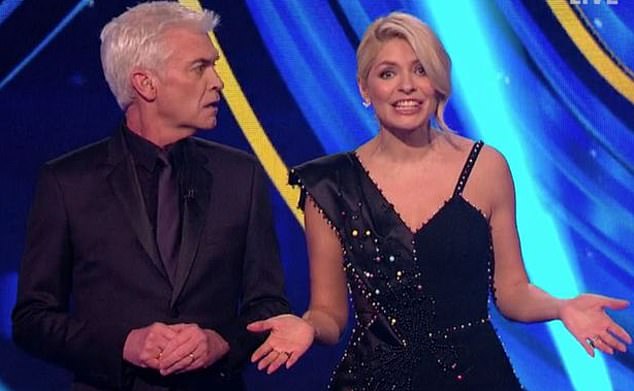 Yikes: The departure of the former Neighbours star, 52, is the latest in a string of blows, after Joe-Warren Plant, Billie Faiers, Denise Van Outen and Rufus Hound all bowed out of this year’s show

The remaining contestants are also battling injuries which could compromise the future of the show.

Rapper Lady Leshurr, 32, revealed she is suffering from pain in her leg while WAG Rebekah Vardy, 38, is doing her best to soldier on despite a groin injury.

Opening Sunday’s Valentine’s Day episode ahead of Jason’s shock departure, host Phillip Schofield joked that he and Holly Willoughby would have to perform to make up the numbers

Phil explained that Joe-Warren and his partner Vanessa Bauer were forced to withdraw after they both tested positive for COVID-19.

Heturned to Holly and quipped: ‘It’ll be us skating at this rate!’ Holly didn’t seemed thrilled with the notion, nervously giggling and replying: ‘Oh, don’t say that!’ 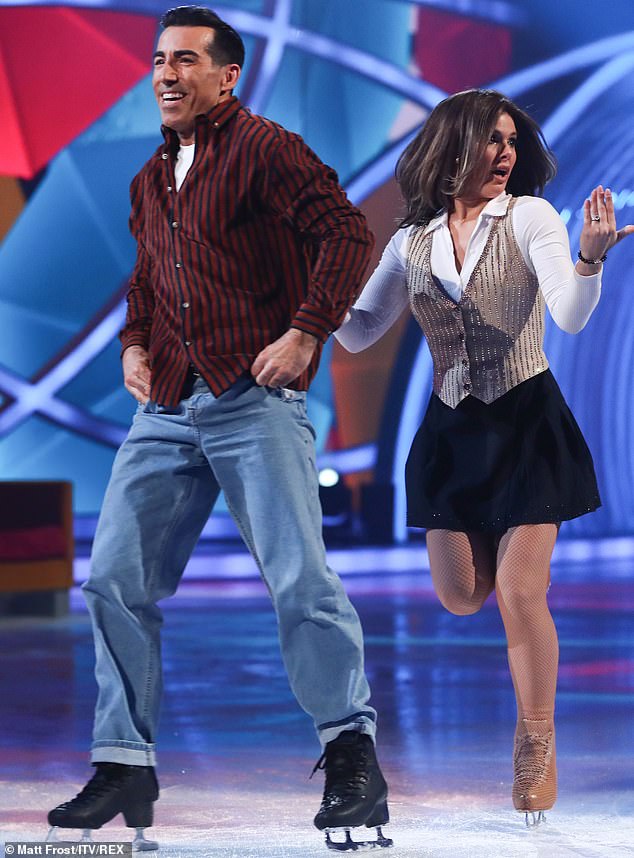 Hanging on by a thread: A source revealed that Dancing On Ice is now in jeopardy as production will struggle to fill the two-hour ITV episode slot and could be ‘forced off air’

The show opened with a nod to judges Torvill and Dean as Sunday marked 47 years since they won gold skating to Maurice Ravel’s Boléro at the 1984 winter Olympics.

After this, Sonny Jay took to the ice as Pop-Eye, alongside pro partner Angela Egan as Olive, to end up scoring the highest result of the series thus far for their iconic love story-themed performance.

Following them were Lady Leshurr and Brendyn Hatfield who performed as Anthony and Cleopatra.

Their score came in lower than Sonny and Angela’s, with Jayne even accusing Lady Leshurr of cheating twice, when she placed two skates on the ice when she wasn’t meant to.

Co-judge John seemed more occupied by Brendyn in his hunky Anthony get up.

Next up it was the turn of Faye Brookes and Hamish Gaman – with Faye emotional having to spend Valentine’s Day away from her boyfriend.

He sent her gifts, however, and she was seen tearfully FaceTiming him in her VT before her dance with Hamish.

The duo performed as Kate Middleton and Prince William, receiving a lukewarm score because, according to judges, they were ‘capable of so much more’ – a comment that left Faye in tears yet again.

Hamish was suffering an injury, revealing he’d hurt his finger while putting a sock on during the week. 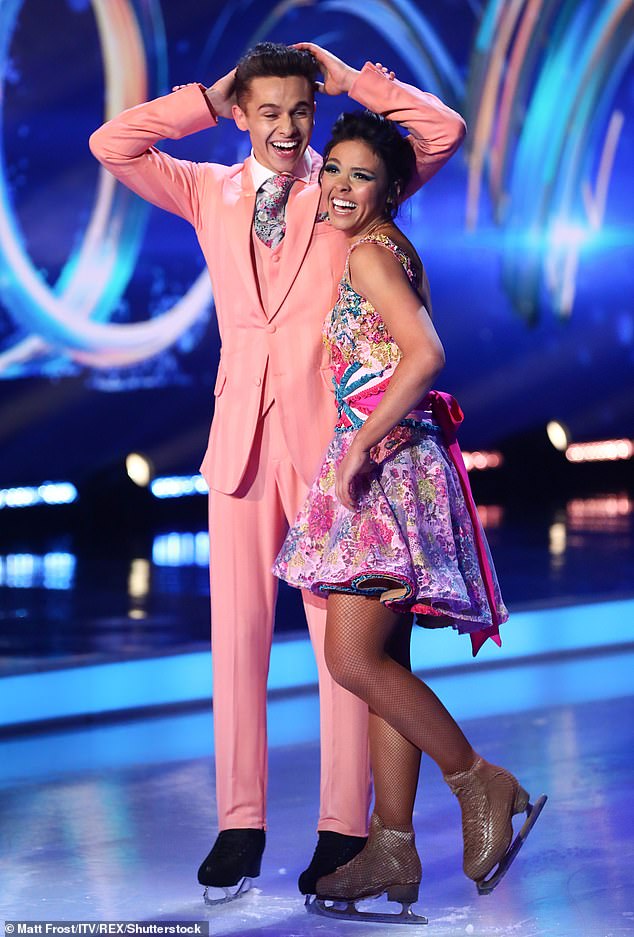 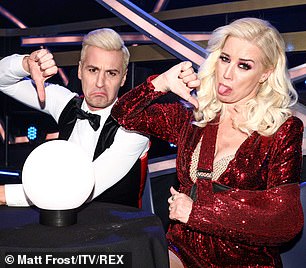 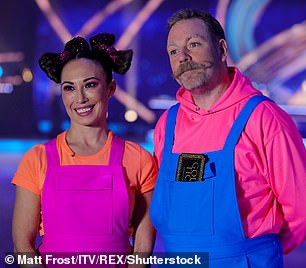 Oh dear! (L-R) Denise (pictured with Matt Evers last month) was forced to drop out too, after she dislocated her shoulder; Comedian Rufus was axed from the competition last month after he tested positive for the virus twice (pictured with partner Robin Johnstone last month)

Next up were Rebekah and Andy Buchanan, who took on the roles of Ross and Rachel from sitcom Friends – despite Rebekah claiming she had never watched the iconic series before.

They scored well – with the judges praising her for taking on the headbanger move, which Holly claimed she was unable to watch.

Amy Tinkler and Joe Johnson were up next, as Bonnie and Clyde – leading to a tiff between John and fellow judge Ashley with the former slamming them and the latter praising them.

Colin Jackson and Klabera Komini performed the last dance of the show, with a Pride And Prejudice theme. Yet Holly claimed was more like raunchy Netflix show Bridgerton with its up-close-and-person moves.

Ultimately, Amy, 21, was the latest contestant to be booted from Dancing On Ice following a skate-off against Lady Leshurr.

The retired Olympic gymnast was drafted in to replace Denise after she had to quit the series following an injury.

She made her ice debut last Sunday alongside pro skater Joe but has now been axed, after the four judges unanimously chose to save rapper Lady Leshurr. 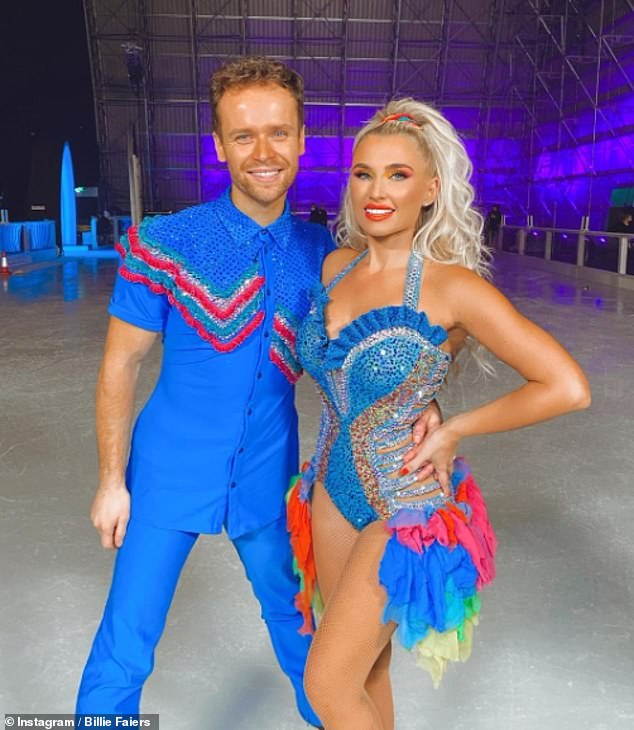 Determined: Billie was also forced to withdraw from the show after suffering a fall during training (pictured last month)