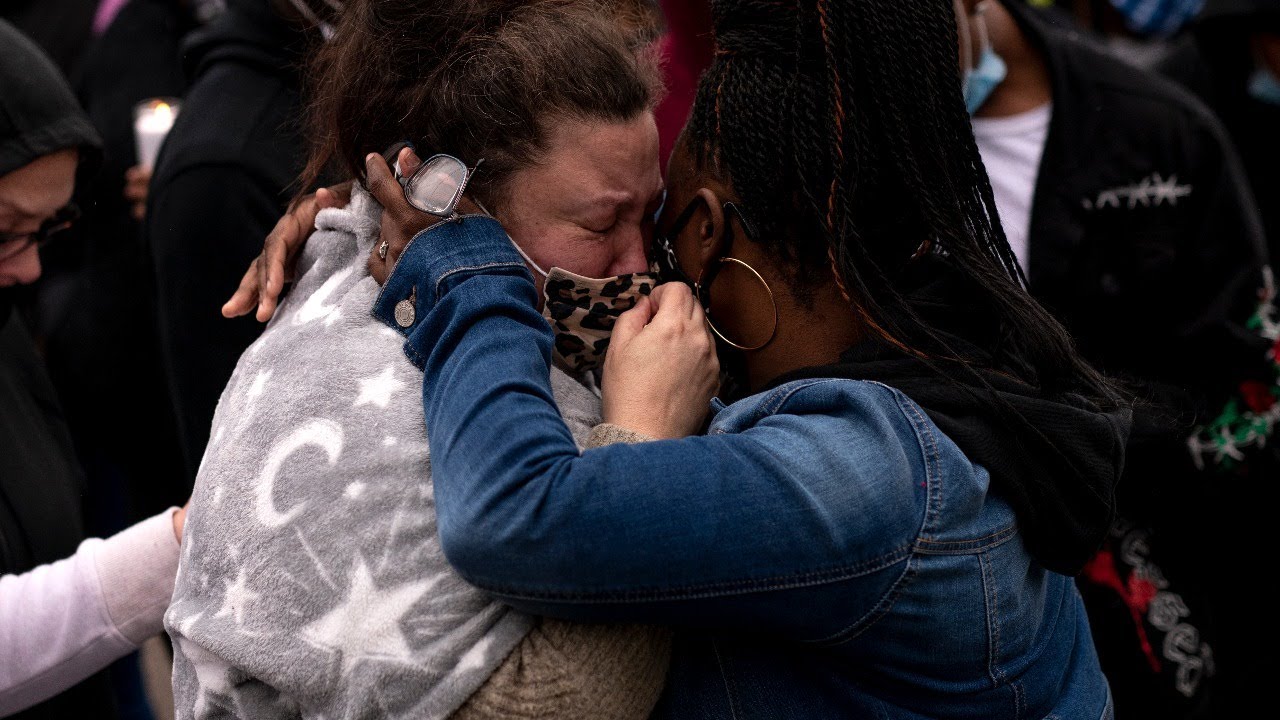 BROOKLYN CENTER, Minn. — The Twin Cities metro area was under a curfew and hundreds of Minnesota National Guard troops were in the streets to attempt to keep the peace on Monday night, a day after a police officer in nearby Brooklyn Center fatally shot a 20-year-old Black man during a traffic stop.

Daunte Wright’s death, which set off protests and unrest on Sunday night, was ruled a homicide by the Hennepin County Medical Examiner.

Protests were already underway Monday night in New York City, where protesters blocked roads and the Manhattan Bridge in solidarity.

Minnesota Gov. Tim Walz imposed a curfew from 7 p.m. until 6 a.m. Tuesday for three counties that include Brooklyn Center, Minneapolis, and the capital of St. Paul. Just over 500 members of the National Guard have been called in to patrol around the Twin Cities.

A candlelit memorial for Wright, including a raised fist statue, was erected where he was shot Monday night.

At the Brooklyn Center Police Station, Minnesota State Troopers in riot gear faced off with protesters as the rain fell.

The Minneapolis area is forecast to be showered by snow and rain tonight and Tuesday, according to the National Weather Service.

“Because temperatures are expected to fall into the 30s overnight, light snow” should be expected in the area, but “little snow accumulation is expected,” the weather service wrote.

The Minnesota Twins, Wild and Timberwolves all postponed home games scheduled for Monday.

“We came to the conclusion that the right thing to do was for us to not play today, rooted in respect for the Wright family but also rooted in our mind in the safety of all of those involved in today’s game,” Twins President Dave St. Peter said.

‘This is murder’: Outrage builds over death of Daunte Wright in traffic stop; police chief says officer intended to use Taser

During a news conference Monday, the Brooklyn Center Police Department released bodycam footage of the incident that took place in a Minneapolis suburb about 10 miles from where George Floyd died in police custody last May.

Wright was shot once and died after the traffic stop, Police Chief Tim Gannon said. Bodycam footage showed two other officers approaching Wright’s car and the officer who fired the shot standing behind them.

As the officer on the driver side of the vehicle began to handcuff Wright, he broke free, a struggle ensued, and Wright jumped back into the driver’s seat. An officer threatened to tase him, shouting, “Taser!” at least three times before shooting Wright, then saying, “Oh (expletive), I just shot him.”

The car drove away, traveling several blocks before hitting another vehicle.

During the news conference, community members watching from the lobby of the Police Department headquarters expressed their anger as others protested outside.

Read more on race and identity:Sign up for USA TODAY’s This Is America newsletter

“This is murder. This is white supremacy. Who’s going to stand up for our ancestors who built this land but are still kept down?” said Jonathan Mason, a community activist.

“Whether it be carelessness and negligence, or a blatant modern-day lynching, the result is the same. Another Black man has died at the hands of police,” Johnson said.

Seth Rogen reveals Emma Watson left 'This is the End' set: 'She was probably right'

J.K. Rowling has a new children's book, 'The Christmas Pig,' out in October

No-prescription, rapid COVID-19 home tests to be sold at CVS, Walgreens and Walmart beginning this week

MLB power rankings: Dodgers remain at No. 1 despite losing series to Padres

'We're not ready to play': Canucks veteran says rushing back after COVID-19 outbreak is 'dangerous'

The 11 best-dressed Oscars stars: Regina King and Zendaya, we'd like our breath back, please

Family of Alton Sterling accepts $4.5 million settlement nearly 5 years after he was killed by police