Denise Van Outen QUITS Dancing On Ice after fracturing her shoulder in freak accident as she says: ‘I’m bailing out with my bling sling!’

By Laura Fox For Mailonline

Denise Van Outen has announced she’s withdrawn from Dancing On Ice after learning she’d fractured her shoulder in an accident during training.

The presenter, 46, penned an Instagram statement telling fans that despite originally being told she’d only dislocated her shoulder, new information about the injury meant she’d be unable to continue with training.

Denise had injured her shoulder just two days before she was due to take to the ice for the first time with Matt Evers, and despite making it through the performance the pair earned the lowest score of the night.

She wrote: ‘GUTTED! If you’ve been watching @dancingonice you will be aware that just over a week ago I had a nasty fall and injured my shoulder. I managed to skate my first dance with @themattevers on the live show through a gritted smile because the pain was unbearable. 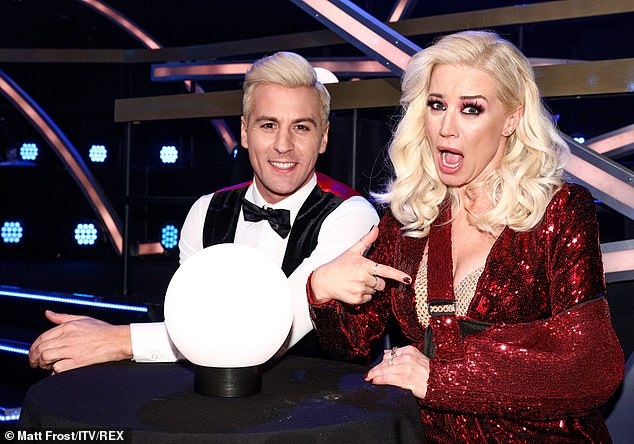 Can’t carry on! Denise Van Outen has announced she’s withdrawn from Dancing On Ice after learning she’d fractured her shoulder in an accident during training

‘I’ve tried as hard as I can to carry on because I love the show and the amazing team in front and behind the cameras. Initially we thought with rest I could make a return to the ice, but a recent MRI scan has shown that I have 3 bone fractures as well as a partial dislocation. OUCH! No wonder I’ve been in agony.

‘I won’t be able to do any lifts,tricks or solo skating on the show due to my injury. I’m going to bail out gracefully with my DOI bling sling.

‘@themattevers has been the most incredible support and skate partner (a true friend) and I’m so grateful for his expertise in teaching me (ice virgin��⛸) the basics.

‘I just wish I was well enough to learn all the fabulous tricks my injury won’t allow me to do. Chair dancing on Ice with a massive pie won’t get us points on the leaderboard ��.

‘I’m actually proud of what I’ve achieved ( not much, lowest scores so far ��) . If you don’t mind I’m going to give myself a couple of points for bravery for doing cartwheels on Ice at 46 with broken bones ������❄️.

‘I wish all the celebs, pros and judges the best of luck for the rest of the series. I’m rooting for you all. Bunch of legends.’

E10 fuel changes are 'no brainer' and should be launched by end of 2021, says top Tory

Saturday Kitchen: Naga Munchetty and Charlie Stayt get over 100 complaints