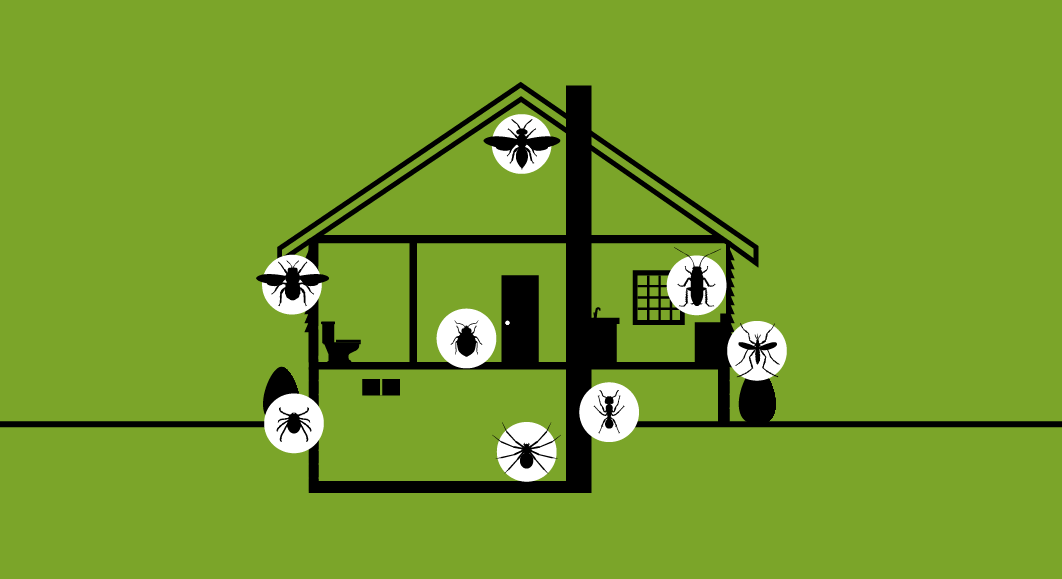 Let’s face it: Bugs bug us. Most people are grossed out by unwanted pests they encounter at home. With summer just around the corner, many will be making an appearance. In a recent survey, people ranked cockroaches overall as the most hated bug. And for good reason: Cockroaches are the fastest runners, moving almost a foot per second, and are hard to catch. Spiders and bed bugs ranked second and third.

A wide range of pests can lurk within a home. They can also damage your home’s structure. Here are some facts on common pests found in and around the house:

The German cockroach is the most troublesome domestic species in North America. Cockroaches feed mainly at night and will eat almost anything. Some show a preference for beer. Weird fact: A cockroach can live without its head. They have an open circulatory system, which allows them to breathe through tiny holes in their body segments. They have no mouth, and they’ll die without water.

Black widow spiders have unique colors of black and red. They have a venomous bite that’s reported to be 15 times stronger than a rattlesnake’s, causing nausea and muscle aches and sometimes difficulty breathing.

The Centers for Disease Control and Prevention has long considered bedbugs a public health pest. These flightless pests are tiny bloodsucking insects that feed on the blood of humans and animals. They’re commonly found in bedding or furniture in homes. They’re also found in hotel rooms, schools, offices and public transportation.

Weather conditions can affect mosquito behavior. The warmth and dampness of summer typically make for their peak season. For mosquitoes, wetter is better, so heavy rains after drought conditions and very high tides can trigger mosquito blooms. Because they’re susceptible to drying out, most mosquitoes spend sunny days in shady, humid spots.

Warmer temperatures means more people will spend time outdoors. Ticks linger on tall grass and in wooded areas, such as parks, which allows them to hitch a ride on you or your pet, allowing them to enter your home.

There are 16 species of wasp within the United States, with three main types commonly found: paper wasps, hornets and yellowjackets.

Christened Camponotus pennsylvanicus in 1773, the black carpenter ant was the first North American ant to be named. They life primarily in the eastern U.S. and cause millions of dollars in structural damage each year.

They can be a severe threat to a home, causing structural damage over time if not managed. There are five species of carpenter bees in the United States.

If you need to call an exterminator, the average cost can be $100 to $300, according to HomeAdvisor.com. Depending on the pest, costs can be as little as $53 and be as high as $5,000 for bedbug treatments.

Dump standing water: Standing water can quickly become a breeding ground for mosquitoes and other bugs (and lead to a host of other problems).

Close off entry points: Pests enter the home most typically through windows, doors and the garage. To that end, patch any holes or tears in screen doors and windows, or better yet, replace them entirely. Keep doors, windows and the garage otherwise closed.

Don’t feed the bugs: Regularly sweep around areas where food is prepared and consumed. Wipe up spills immediately and close food containers securely. Be sure your kitchen garbage has a tightly fitting lid.

Stories like this are possible because of our subscribers like you. Your support will allow us to continue to produce quality journalism.

Stay up to date by signing up for one of our newsletters.

Grass bans, 'water police,' prayers for rain: Drought in the West threatens 'our way of life'

Grass bans, 'water police,' prayers for rain: Drought in the West threatens 'our way of life'

To binge or not to binge? Why it's a good thing Netflix, Disney+ are releasing some shows weekly

Lowe's 'SpringFest' has free curbside 'Garden-to-Go' projects for families in April. How to sign up.

My American classmates graduated in cap and gown. In India, I graduated during a COVID crisis.

Everything we know about Kelly Preston's final movie 'Off the Rails'

President Joe Biden's first press conference: When and where to watch — and what he might get asked

Exclusive: How Donald Trump upended Nancy Pelosi's plans, then she unraveled his