Kristin Cavallari is disputing claims from Southern Charm’s Austen Kroll that she ‘slid into’ Craig Conover’s DMs before a night out.

The now-infamous night in question saw the 33-year-old Laguna Beach star climbing onto the shoulders of Kroll during an Instagram live while dancing to Taylor Swift after some drinks.

Kristin and her good pal Justin Anderson are refuting Kroll’s accusations she would ‘DM’ anyone, with Cavallari writing ‘nothing to see here people’ in a recent Instagram post on the matter. 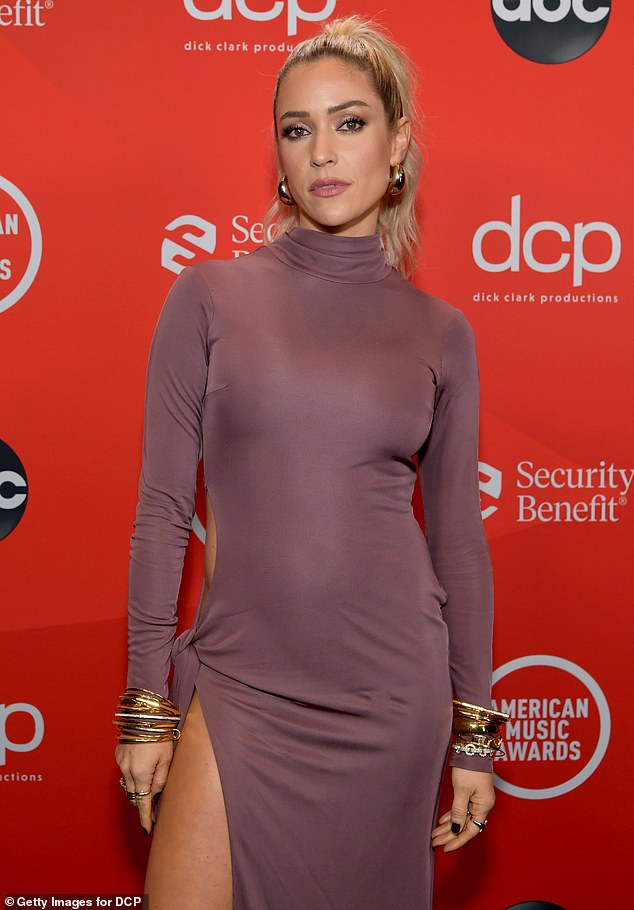 Not having it: Kristin Cavallari, 33, disputes Southern Charm star Austen Kroll’s claims that she ‘slid into’ Craig Conover’s DMs before a night out as her good pal Justin Anderson goes to bat for her on social media 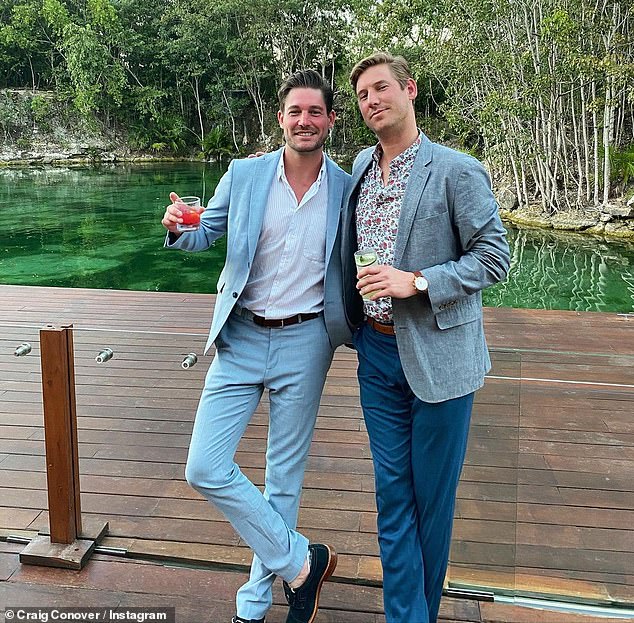 Speaking to Andy Cohen on a Thursday episode of Watch What Happens Live, Kroll said the foursome became friends when Cavallari reached out to Conover on social media.

‘Honestly, she slid into Craig’s DMs and was like, ‘I’m coming into town,’ so we all went to dinner and we all just hit it off,’ Kroll said.

A fan continued to pry Kroll for answers on their supposed friendship,  following a cheeky comment from him on her bikini photo that read, ‘See you next week! Keep breaking the Internet in the meantime.’

Asking if there was ‘something else going on there,’ Kroll responded ‘We just all get along so, so well,’ as he added, ‘She is certainly just living her best life,’ following her split from Jay Cutler in April. 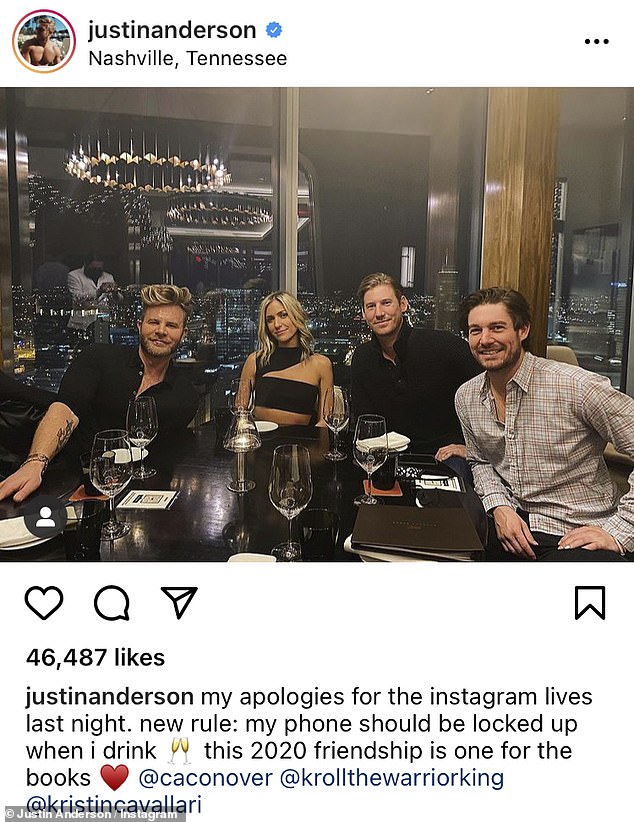 Wild night: The Laguna Beach star, Anderson and the Southern Charm boys enjoyed a raucous night out last week where they were seen drunkenly dancing to Taylor Swift on an Instagram live after grabbing dinner; December 14 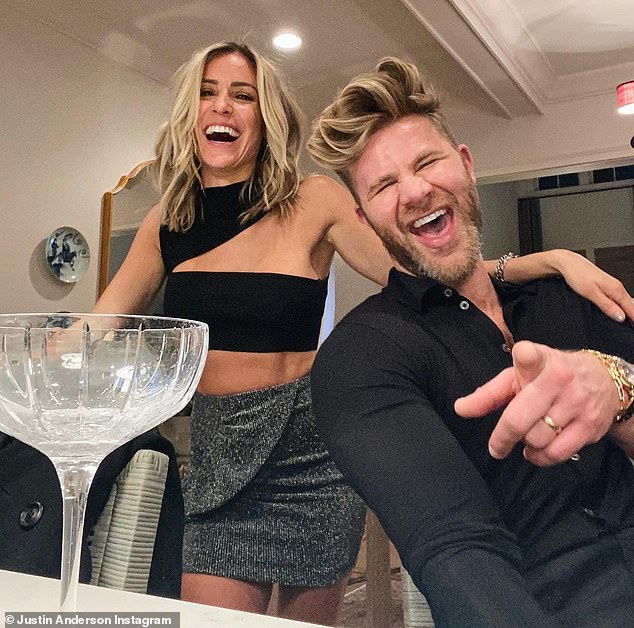 Got your back: Longtime pal Anderson went to bat for Kristin on Instagram as he said ‘Kristin would never randomly slide into anyone’s DM…’; pictured December 14

Not letting the boys get off so easy after their television appearance, her longtime friend and hairstylist Anderson went to bat for her on social media.

Posting to his Instagram story on Friday he said:

‘I was a fan of our new friends craig and austen and we visited charleston and met up with them…I pushed for the friendship. Kristin was along for the ride and no one is hooking up or even flirting. four adults who are friends. let’s move on.’ 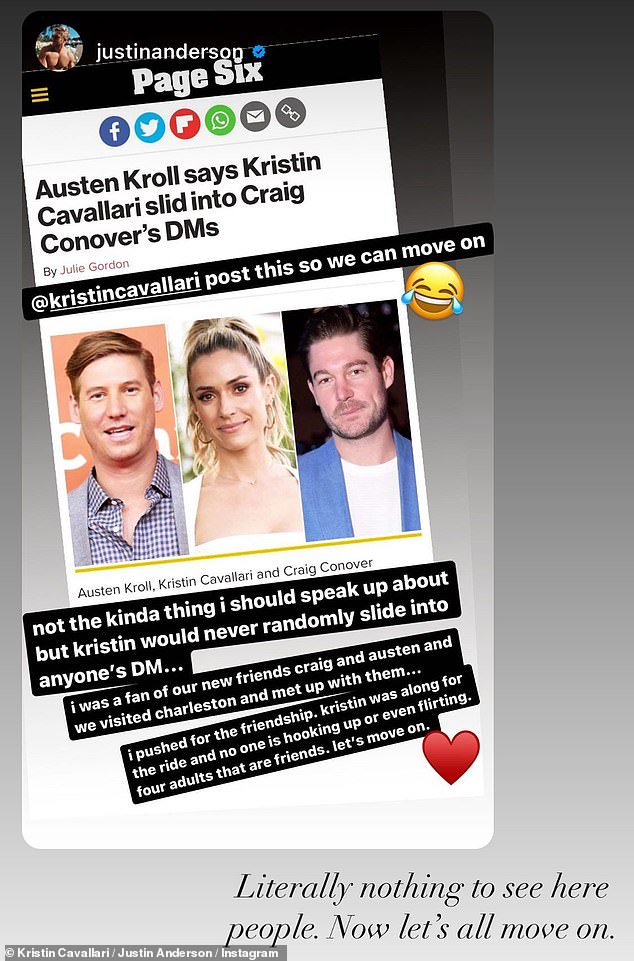 Moving on: Reposting Anderson’s story Cavallari said, ‘Now let’s all move on’ as she seconded her friend’s statements about the untrue DM claims

Cavallari reposted the message while adding ‘Literally nothing to see here people. Now let’s all move on.’

She continued to take issue with the swirling rumors as she ranted on social media Saturday.

Posting some photos of a beach walk alongside children Camden, eight, Jaxon, six, and daughter Saylor, five – who she shares with estranged husband Jay Cutler – Kristin seemed to be airing her grievances.

‘My kids put everything in perspective. All these stupid internet rumors, people thinking they know me or my situation. It’s all just noise.’ 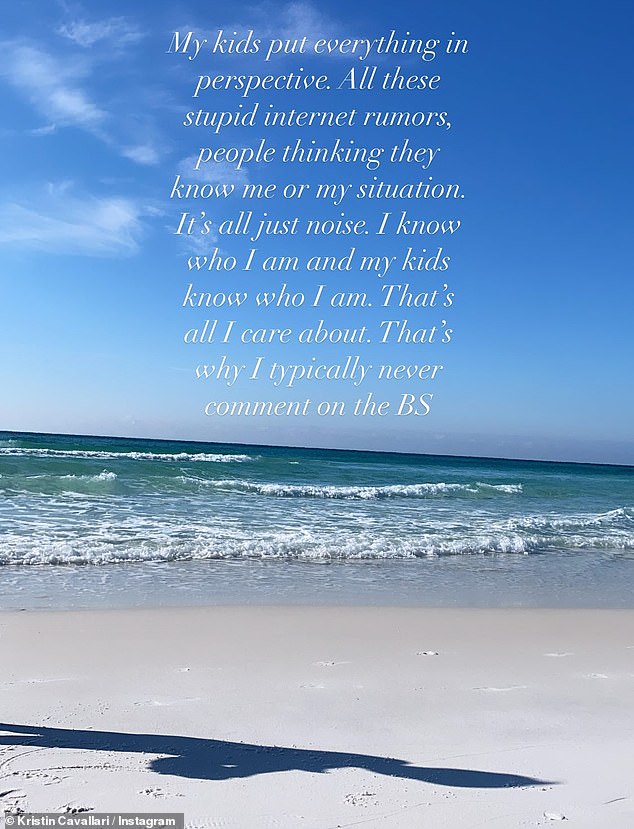 Speaking her truth: ‘All these stupid internet rumors, people thinking they know me or my situation. It’s all just noise,’ the Uncommon James founder wrote on her Instagram story

She continued, ‘I know who I am and my kids know who I am. That’s all I care about That’s why I typically never comment on the BS.’

Wanting to keep her name out of people’s mouths she said that things were frequently exaggerated in the media before going mum after saying her piece.

Despite Kroll’s accusations, Conover is currently in a relationship with Natalie Hegnauer who made her appearance this season on the hit Bravo show.

In recent weeks Cavallari has been seen packing on the PDA with her new comedian beau Jeff Dye who frequently leaves flirty comments on her social media.

The pair were seen vacationing together in Cabo, with him shutting down rumors of her and Kroll’s involvement as he tweeted, ‘He wishes.’ 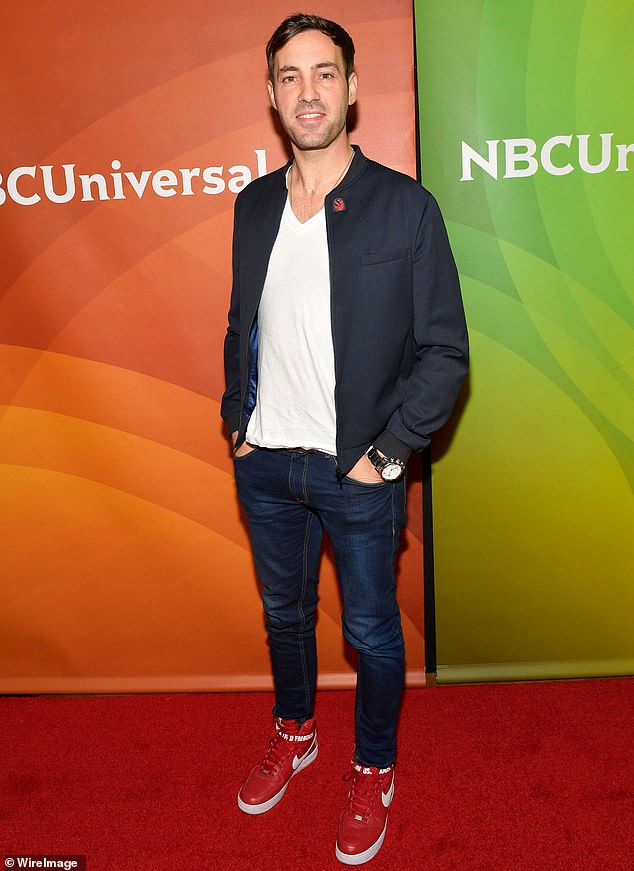 Heating up: In recent weeks Dye and Cavallari have been spotted packing on the PDA while on vacation in Cabo and he frequently leaves flirty comments on her Instagram