The Bronco has finally been released into the wild.

Take a step back in time: This bestselling SUV was last built in 1996, the year that the Fox News Channel debuted, “Independence Day” dominated the box office and “Macarena” topped the music charts.

“The Broncos are out of the gates, out of the corral,” Erik Williams, Ford plant manager at Michigan Assembly Plant in Wayne, Michigan, told a handful of reporters on Monday during a tour.

Factory sounds filled the enormous room, and Williams spoke loudly as Cyber Orange and Shadow Black Bronco SUVs rolled off the production line. Ford Ranger trucks, built in the same plant, are interspersed between the Bronco SUVs on the line.

No one at Ford would say how many Broncos would be shipped this week or this month.

► An Amazon guide:How to hack Amazon Prime Day from Reviewed and USA TODAY.

“Customers will be receiving them any day now,” he said. “It’s been a long time, almost 25 years to the day, that the last Bronco rolled off the line here.”

Over the years, Grueber has been one of the most vocal advocates for bringing back the Bronco, which had earned a cult following. Ford CEO Jim Farley predicted a year ago – before he assumed the top job – that Ford planned to steal loyal Jeep Wrangler fans with the hot new product.

Already, two-thirds of Ford Bronco Sport customers have migrated to Ford from other automakers. The Bronco Sport is the smaller version that debuted late last year.

“We know we’re getting a very new and different customer,” Grueber said.

Bronco saw production delays not just from COVID-19 challenges and supply chain disruption of parts, but an issue with tops for its vehicles.

“We’re making great progress with our roof partners and working with them on a daily basis,” Grueber said.

Broncos are being built with soft and hard top roofs now, he confirmed.

► iOS 15:Why I’ll keep my driver’s license in my wallet and not my iPhone.

Workers said semiconductor chip supplies are flowing into the factory despite industry shortages.

“It was a no-brainer,” he told the Detroit Free Press, part of the USA TODAY Network. “We’re proud of the work we do, and the Bronco is an iconic vehicle.”

“The excitement here – you can feel the vibes on the floor,” he said

Ford added 2,700 jobs at Michigan Assembly and saw $750 million in improvements to build the all-new two-door and first-ever four-door Broncos.

While Ford declined to provide specifics on the production schedule, Sam Fiorani, vice president of global vehicle forecasting at AutoForecast Solutions based in Chester Springs, Pennsylvania, said his sources have indicated that Ford is hoping to build about 80,000 Ford Bronco SUVs in 2021 and about 160,000 in 2022.

“When the Wrangler was selling two-door vehicles, Jeep sold 80,000 a year,” Fiorani said. “When they started doing four-door Wranglers, it took off. Now they’re building over 250,000 a year. That’s the market Bronco is going for.”

► Year old note, ‘apocalyptic feeling:Delta pilot finds note. It sat in a plane for more than a year. 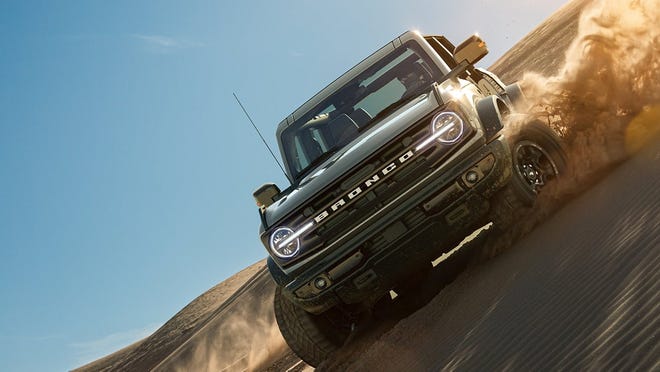 The pandemic forced us to stop hugging, shaking hands. That's not necessarily a bad thing.

Live updates: Biden says he plans to run for reelection, expects Harris to remain on ticket