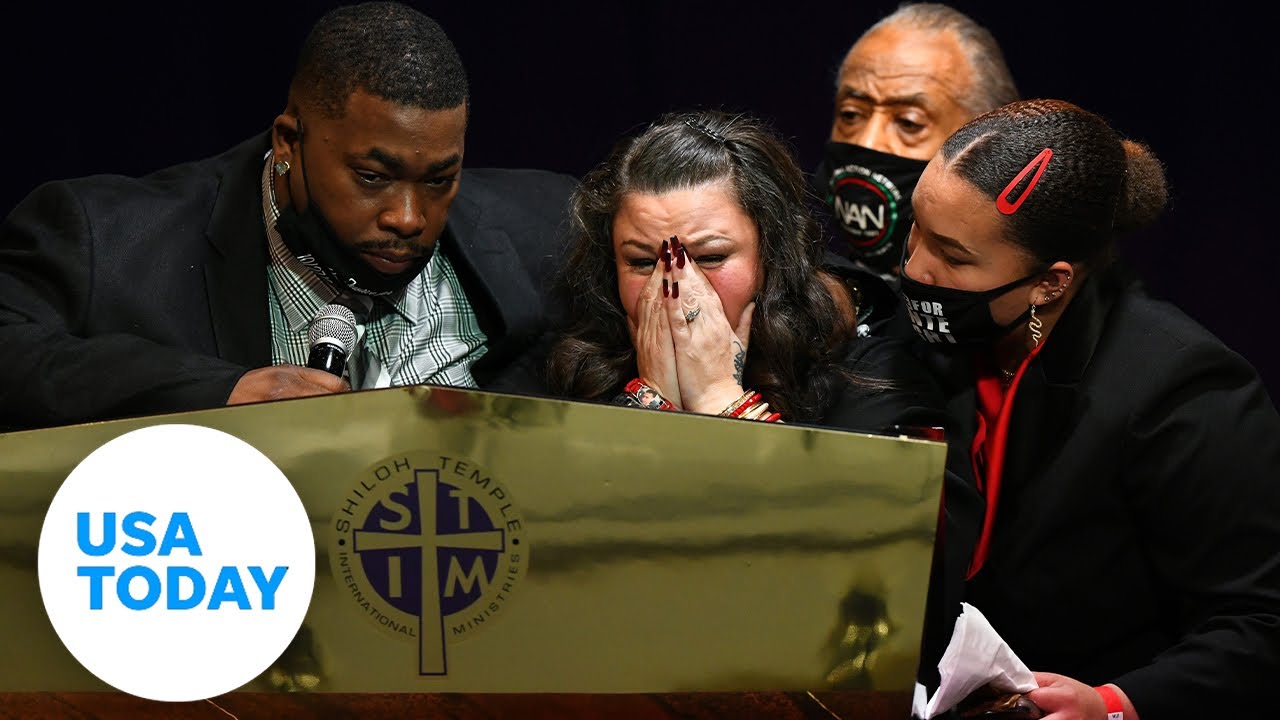 MINNEAPOLIS – Family and friends of Daunte Wright gathered Thursday at a funeral in Minneapolis to honor the life of the 20-year-old Black father fatally shot during a traffic stop by a veteran Minnesota police officer.

Civil rights leader Al Sharpton, who will give a eulogy at the service, was outside Shiloh International Ministries as Wright’s family arrived shortly before noon, 11 days after Wright’s death in nearby Brooklyn Center.

Wright’s death sparked anger, sadness and frustration in a community already on edge amid the trial of Derek Chauvin.

Chauvin, a former Minneapolis police officer, was found guilty Tuesday on all three counts of murdering George Floyd. Kim Potter, the former Brooklyn Center police officer who shot Wright, resigned in the days after his death and has been charged with second-degree manslaughter. The city’s former police chief, who also resigned, said he believed Potter thought she was using her Taser when she pulled out her firearm.

Outside the church, mourners gathered, including several people whose loved ones were killed by police.

Rayshad Henry and Brian Jackson know Wright’s father and said more needs to be done to hold officers accountable. “We’re losing too many brothers at the hands of the police,” said Henry, who donned a hat that says ‘I can’t breathe.’ “These cops must be held accountable.”

Jackson said he first learned of Wright’s death on the news and reached out to the family after seeing Wright’s father at a news conference conference. They grew up together. “I feel sad, not so much angry,” Jackson said. “He just had a kid; now that kid has got to grow up without a father. … I know he would’ve been a good dad.”

Gov. Tim Walz asked Minnesotans to join him in a two-minute moment of silence at noon, when Wright’s funeral begin.

“Nothing can bring Daunte back to his loved ones. But we will continue working to enact meaningful, lasting police accountability and reform,” Walz tweeted.

Wright has been remembered as a young father to Daunte Jr. who enjoyed spending time with family on the Fourth of July. “He was loved. He was ours,” aunt Naisha Wright said last week.

‘He did not deserve this’:Family remembers Daunte Wright as an adoring dad who enjoyed playing sports and celebrating the Fourth of July

During protests over Wright’s death, hundreds who convened nightly at the Brooklyn Center police station were met with rubber bullets, tear gas and members of the Minnesota National Guard. The city was under curfew for several nights as police and protesters clashed and dozens were arrested each evening.

Wright was pulled over on April 11 in Brooklyn Center, about 10 miles north of Minneapolis. His mother, Katie Wright, said her son called her during the stop and said it was about air fresheners in his rearview mirror. Police later said he was stopped for an expired registration. Wright had an outstanding misdemeanor warrant, which led officers to try to arrest him.

Body-camera footage released shortly after his death showed Potter, who is white, intervening as the officer handcuffing Wright stopped for a moment. A scuffle broke out in which Wright appeared to reenter the driver seat. Potter is heard shouting “Taser” as she draws her Glock instead. She shoots Wright, who then drove away, and Potter is heard saying, “(Expletive), I just shot him.”

Tim Gannon, the Brooklyn Center police chief who resigned, characterized the incident as a “accidental discharge.”

However, Wright’s family have said they can’t accept that account of their son’s death and demanded full accountability for Potter.

How could a gun be mistaken for a Taser? There have been at least 16 incidents of ‘weapon confusion’ since 2001.

Katie Wright said last week “justice” in this case would be impossible because it would mean bringing her son home. “Justice isn’t even a word to me,” she said.

Wright’s family is being represented by Ben Crump, the civil rights attorney who also represents the family of Floyd. Members of Floyd’s family are to attend the funeral, Crump’s office said, and have supported Wright’s family to show solidarity and demand accountability in his case, too.

Crump said Wright should not have been pulled over in the first place for a minor infraction, such as an expired car registration, during the COVID-19 pandemic.

The case has also drawn comparisons to that of Mohamed Noor and Justine Ruszczyk Damond. Noor, a Black Minneapolis police officer, fatally shot Damond, a white woman, in 2017 after he said he heard a bang on the side of his squad car and thought Damond was a threat. Noor was convicted of third-degree murder and second-degree manslaughter and sentenced to 12½ years in prison.

“Certain occupations carry an immense responsibility and none more so than a sworn police officer,” Imran Ali, Washington County assistant criminal division chief, said in a statement last week. “We … intend to prove that Officer Potter abrogated her responsibility to protect the public when she used her firearm rather than her taser. Her action caused the unlawful killing of Mr. Wright and she must be held accountable.”

Potter faces up to 10 years in prison if found guilty of second-degree manslaughter.

Lizzo criticized body positivity. Here's what you need to know about body neutrality.

Fact check: False claim persists online that Trump will be reinstated as president in August

What is gua sha? Everything you need to know

What you overlooked Sunday at men's, women's NCAA basketball tournaments

What Naomi Osaka wanted and why it matters

How to get straighter, healthier teeth

CDC says it's investigating cases of heart inflammation in teens, young adults who got the COVID vaccine. Here's what we know.

Dreaming of gold: How sleep has become a key part of Olympic prep for Team USA