“The whole world has made up a story about me,” confides Sharon Stone. “The whole world makes up stories about famous people. They just come out of a regular life like everybody else.”

The Oscar-nominated actress, 63, takes the chance to write her own story with her new memoir, “The Beauty of Living Twice,” out today (Knopf), which she began writing after a near-fatal stroke in 2001.

Stone describes her coal-town Pennsylvania childhood where she started work as a McDonald’s fry cooker, covers her superstar breakout in 1992’s “Basic Instinct” — while saying director Paul Verhoeven misled her over that infamous interrogation scene — and brings us to her current life as a single mom of three grown boys. All while keeping the memoir conversational.

“I want it to feel like it’s that kind of talk with your friend where maybe you’ve had a couple glasses of wine,” Stone says. “So you’re comfortable to say that things you only say to your closest friends.”

Question: First of all, you had to postpone our talk due to the side effects of your COVID-19 vaccine. How are you feeling?

Sharon Stone: It wasn’t awful, just really fatiguing. I just couldn’t drag myself out of the bed mostly and I needed a day. I got it with the first shot. I think because I’ve had this brain issue and I’m on brain medication, it just depends on each individual response. My real concern now is trying to get this vaccine released free for the world, to be free and available in third world countries. Or we’re never all going to get better.

Q: What did you learn as a McDonald’s fry girl, or a pie girl at Bob’s Big Boy?

Stone: Some really good lessons — hard work, showing up, being there on time and paying your dues. And I was doing this in the ’70s. There weren’t job-place rules protecting young girls. I learned a lot about self-defense and how to take care of myself while keeping a job. That has served me well. How to have a really big sense of humor, how to be one of the guys and disarm those situations before they happen. 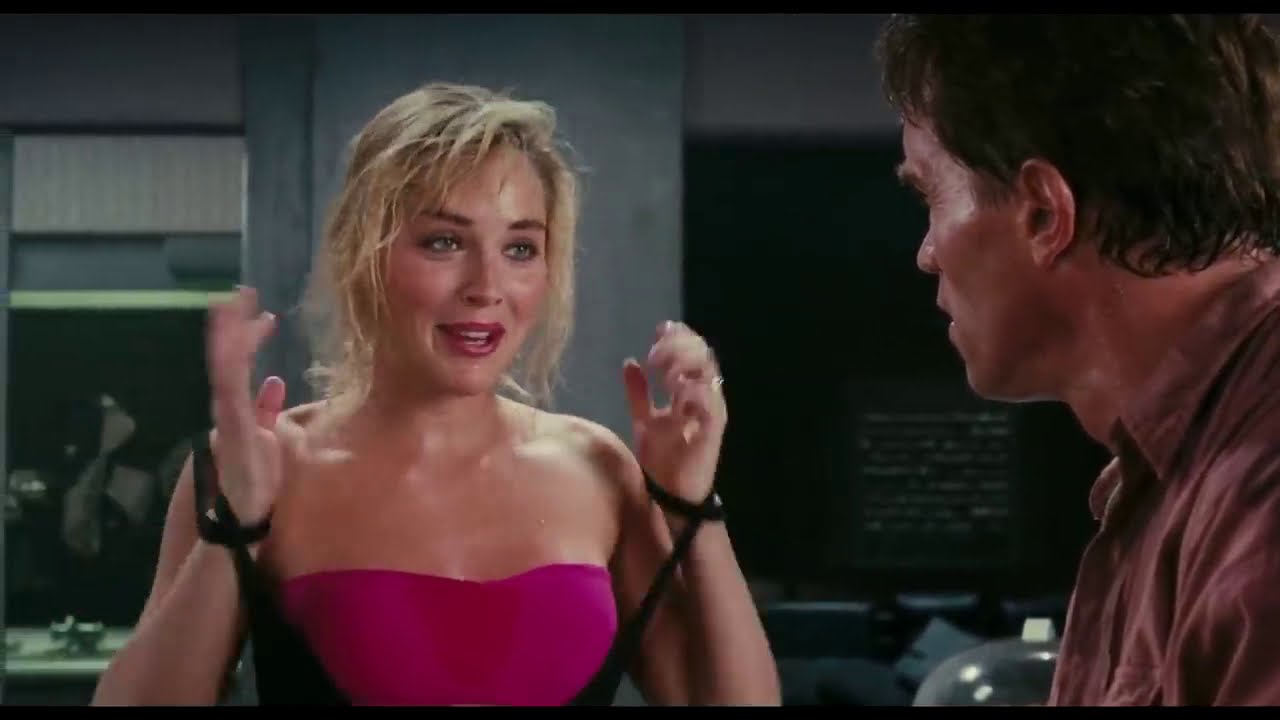 Q: Discussing 1990’s “Total Recall,” you talk about the quest to kick 6-foot-2 Arnold Schwarzenegger’s head. Why was that such a triumph?

Stone:  If you’re not a dancer, it’s tough kicking someone in the face with your heel straight ahead. Even if I’m pretty limber, still. Also, it was Schwarzenegger. It’s daunting because you’re looking at this giant, muscular guy. You don’t want to look like, this fight is ridiculous. That she is actually pounding him. So I black-and-blued him, pretty much head to toe that day. It was hilarious.

Q: Was there any fallout from missed kicks?

Stone: Arnold taught me so much, including how to do interviews. He sat in the booth with all the television monitors, watched my interviews, and then advised me. Like, this is how you do this. He’s a master. That’s how he became governor of California.

Q: You talk about realizing how big “Basic Instinct would be at the Cannes premiere, going to the bathroom to get sick, and your friend explaining the new rules of fame. What were those rules?

Stone: I was on my knees, dry heaving. And he took me to his room, sat me on the side of the tub, ran some cold water, told me to put my feet in there and gave me a Valium. He handled a lot of big stars in his time and he was like, ‘Look, from now on, life is going to change. You need Sharon-Stone-the-movie-star clothes, and then you need your clothes.’ You need to start separating out your life so that you have a sane existence. He actually told me to pay for anything under a hundred dollars with a check because people won’t cash the check. They’ll want your autograph. Which is something I didn’t do. But it was sound advice.

Q: It’s a long way to go from a McDonald’s fryer.

Stone: When I was at Elton John’s wedding, someone said to me, ‘Clark Gable didn’t come from Park Avenue, Sharon. We’re all just a bunch of kids from nowhere who had a dream and look where we are.’ We were standing at that crazily beautiful wedding in a room packed with famous people. And we were the most awkward group you’ve ever seen. Because we all came from Nowheresville.

Q: There are many relationships in this book, but do you have the desire to date now?

Stone: COVID has been a great time for balance, understanding and clarity. This work I’ve done on myself and by writing the book has been very healing. I suspect it will allow me to be a much better partner than I have ever been before. I am actually expecting that I will be able to have a good relationship in the future. But I don’t think COVID is exactly a great time to be looking for romance.

I hope that I do meet someone who has also spent the time becoming their best self and done their own work. But it’s not my vision quest right at the moment.

Demi Lovato pursued contact with her perpetrators after her assaults. It's more common than people think.

Demi Lovato pursued contact with her perpetrators after her assaults. It's more common than people think.

How to clean up broken glass safely

Ukraine on brink as Russia calls bluff on 'one year' warning: 'Time is ticking'

Flu cases were at an all-time low during the 2020-2021 season. What experts say to expect in next season's vaccine.

Ford F-150 electric pickup gets a name and a reveal date: Meet the Ford F-150 Lightning