Some people are c****’: Ulrika Jonsson hits back at troll who tells her to ‘stop whinging’ over depression as she says ‘mental health has no boundaries’

By Rebecca Davison for MailOnline

Ulrika Jonsson called out a troll on Instagram on Sunday after they urged her to ‘stop whinging’ about depression.

The TV star, 53, shared his offensive message to her for all to see as she insisted: ‘mental health has no boundaries.’

The follower wrote to her: ‘You had everything. Stop whinging wake up tomorrow morning make yourself a coffee, sit on your own for a good hour. 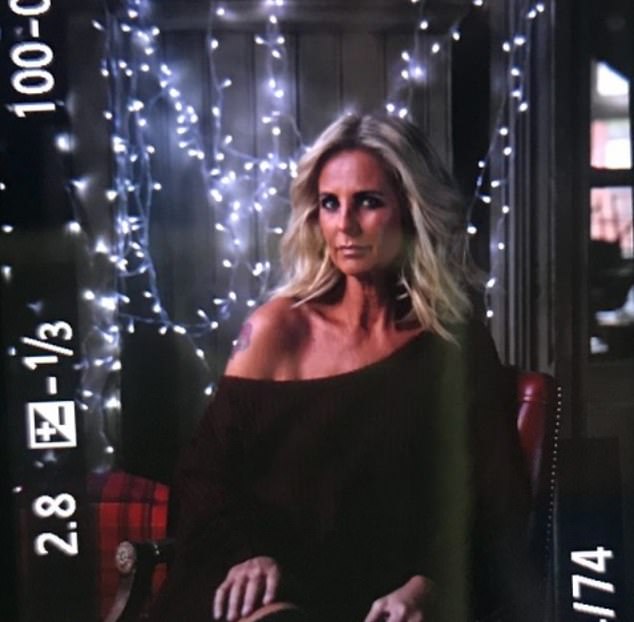 Some people are c****’: Ulrika Jonsson hit back at a troll who told her to ‘stop whinging’ over her depression as she told him ‘mental health has no boundaries’

‘Pick the good things out from your past. Stop thinking about money and s*** you know nothing about. [sic].

Have you ever smoked dockers out of an ash tray, been absolutely penniless. No IU don’t think so, so pick yourself up and move on.’

Ulrika was naturally hurt by the message and wrote over the top: ‘It actually doesn’t happen oftenm  so I’m [praying emoji]. 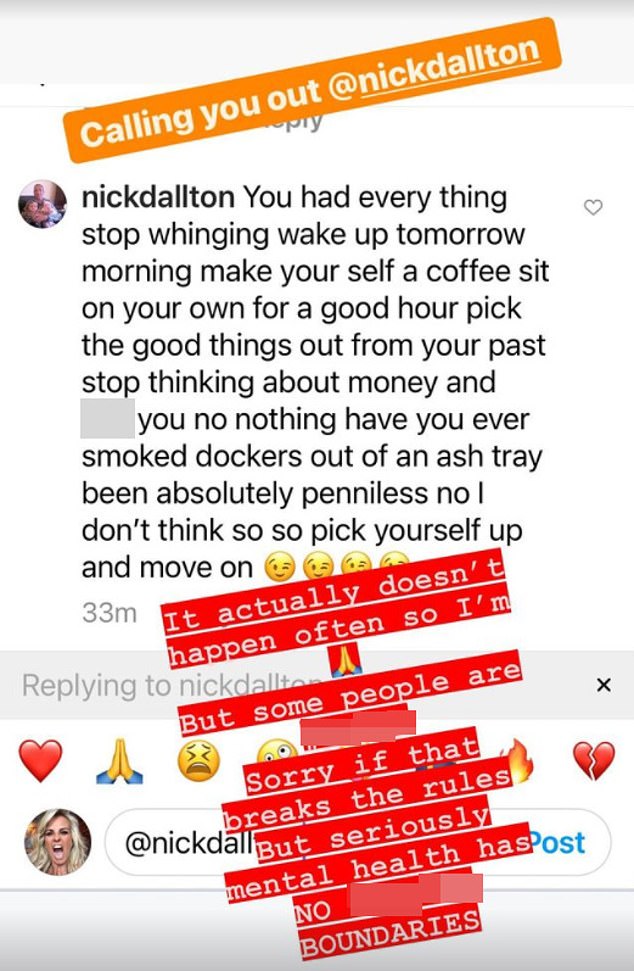 Mind your own business: She shared the offending message on her Stories and gave her strongly worded opinion over the top

‘But some people are c****. Sorry if that breaks the rules. But seriously, mental health has NO F***ING BOUNDARIES.’

Earlier, the former weathergirl had shared an honest yet emotive post about how she was feeling in lockdown on social media.

She had written: ‘It has come to my attention that I could be in the running for the most depressing account on the Gram. 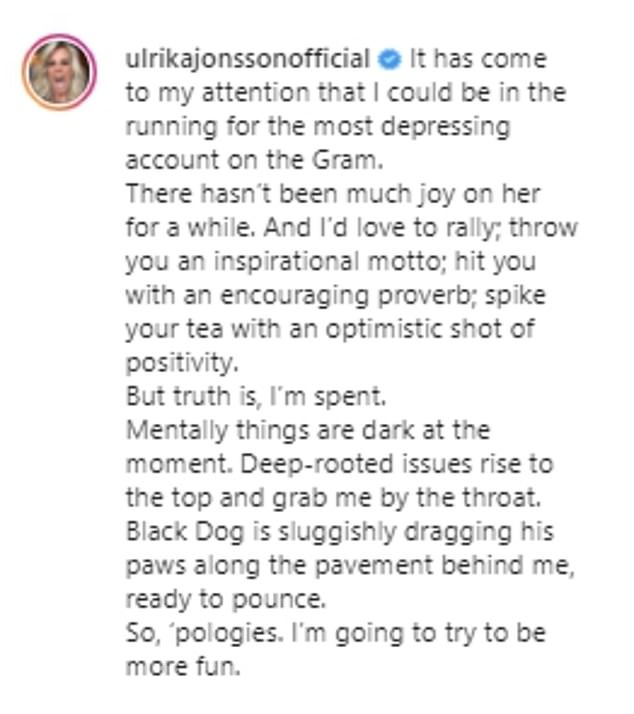 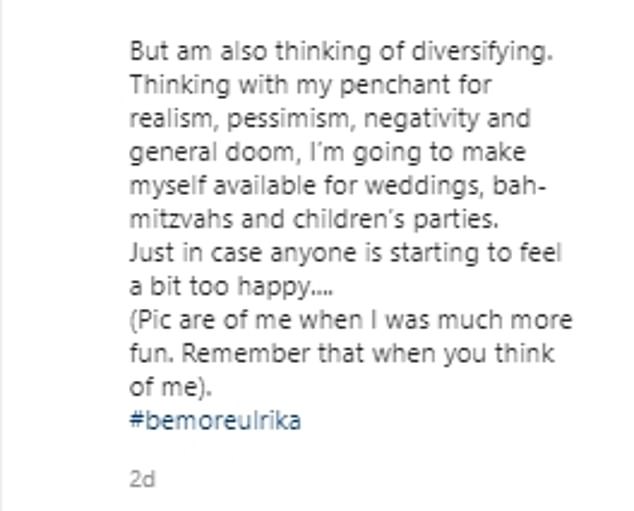 Something to say: Ulrika recently shared this honest and emotive post about how she was feeling

‘There hasn’t been much joy on her for a while. And I’d love to rally; throw you an inspirational motto; hit you with an encouraging proverb; spike your tea with an optimistic shot of positivity.

‘But truth is, I’m spent. Mentally things are dark at the moment. Deep-rooted issues rise to the top and grab me by the throat.

‘Black Dog is sluggishly dragging his paws along the pavement behind me, ready to pounce. So, ‘pologies. I’m going to try to be more fun.

‘But am also thinking of diversifying. Thinking with my penchant for realism, pessimism, negativity and general doom, I’m going to make myself available for weddings, bah-mitzvahs and children’s parties. 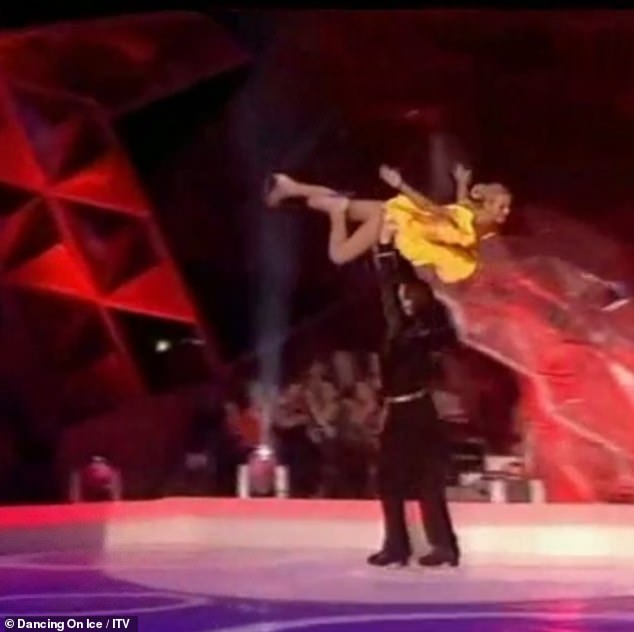 Sharing a picture of herself on Dancing On Ice, Ulrika wrote: ‘This was me this time 14 years ago. 3 kids in. Heartbroken. Terrified. And singularly their worst contestant, I’m pretty sure.

‘Just in case anyone is starting to feel a bit too happy…. (Pic are of me when I was much more fun. Remember that when you think of me). #bemoreulrika.’

On Sunday, Ulrika had been watching the new series of Dancing On Ice and shared a picture from her own time on the show.

She had written: ‘Not worthy of a post. But appaz tonight is the start of Dancing On Ice (see, I don’t even tag or thingy or @ it).

But this was me this time 14 years ago.  3 kids in. Heartbroken. Terrified. And singularly their worst contestant, I’m pretty sure.

Yes, I did the Headbanger. I was terrified of the ice but trusted my wonderful partner #pavelaubrecht who threw me around like a rag doll.

And the ITV team. Think it was the 2nd series.I was asked to gracefully retire after the third show. Thank the Lord. Or the Lady. Must have been a Lady. #bambi’ 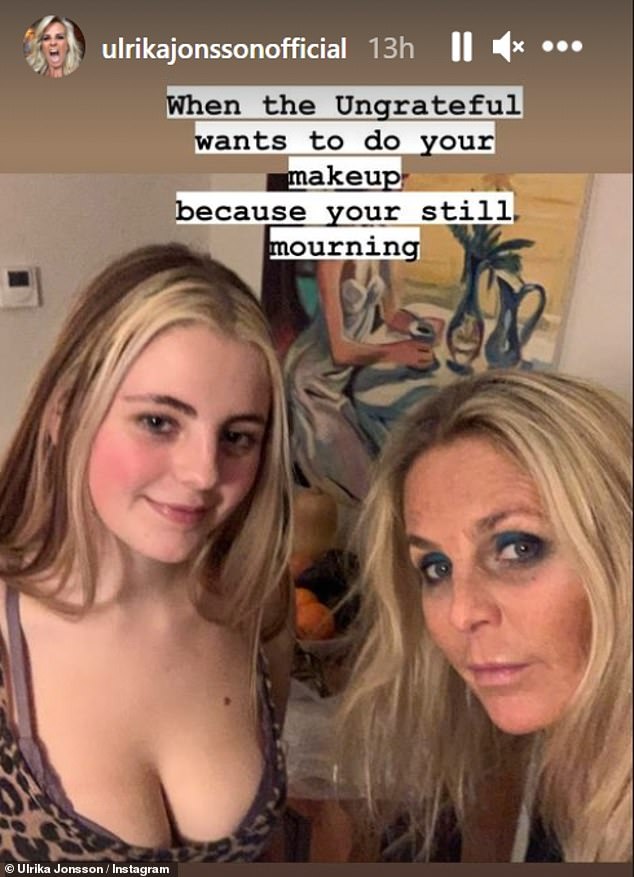 Makeup: Ulrika’s daughter recently gave her a makeover to help cheer her up while she still mourns the passing of her dog Nessie