These aren’t your average NASCAR wrecks. Some crashes at Talladega have been truly terrifying, while some have decimated large chunks of the field, which can then yield surprise winners.

There’s a reason the term “The Big One” was coined to describe the calamitous collisions that can occur on the 2.66-mile Alabama track.

Consider both NASCAR Cup Series races in 2017. In the GEICO 500 that May, a total of 18 cars were involved in a Lap-170 crash. The October playoff race was no different. Only 14 cars finished on the lead lap in the Alabama 500, with more than half the field suffering at least some crash damage by the conclusion.

The 2019 playoff race, which took place over two days on Oct. 13-14 following a postponement because of rain, resulted in three major multi-car crashes and a win by Ryan Blaney in a photo finish. The 2020 playoff race was actually the messiest and longest race in Talladega history, with three overtimes and 13 cautions, two more than the record. The race also featured a frightening crash in the second stage that sent Kurt Bush airborne.

As drivers and teams prepare for the 2021 GEICO 500 (Sunday, 2 p.m. ET, Fox), they are no doubt remembering some of these memorable wrecks (in chronological order):

This is the crash that was the impetus for restrictor plates. Allison blew his right rear tire, spun on the frontstretch and then flew up into the catchfence, tearing up a large section. Allison was uninjured and when he climbed out of the car, the fans gave him a huge cheer.

Dale Earnhardt suffered one of the most terrifying crashes of his career before his untimely death following a crash at Daytona in 2001. Earnhardt, a 10-time winner at Talladega in NASCAR’s premier series, bruised his sternum and fractured his collarbone after Ernie Irvan and Sterling Marlin bumped, sending Marlin into Earnhardt’s car. Earnhardt careened into the wall head-on but walked away under his own power.

Kurt Busch made contact with the rear of Sadler’s car, sending Sadler into an incredible barrel roll that seems as if it will never end. Sadler’s car does a complete 360 in the air, slides across the infield grass on the roof, and then launches back into a series of flips when the car makes contact with the pavement again.

Edwards was on his way to victory in the spring race at Talladega, trying to hold off Brad Keselowski on the last lap, when Keselowski made a move, tapped Edwards’ car and sent the No. 99 sailing. Seven fans were hurt by flying debris when Edwards’ Ford crashed into the front-stretch fence. Edwards would eventually climb out of the car and jog across the finish line. 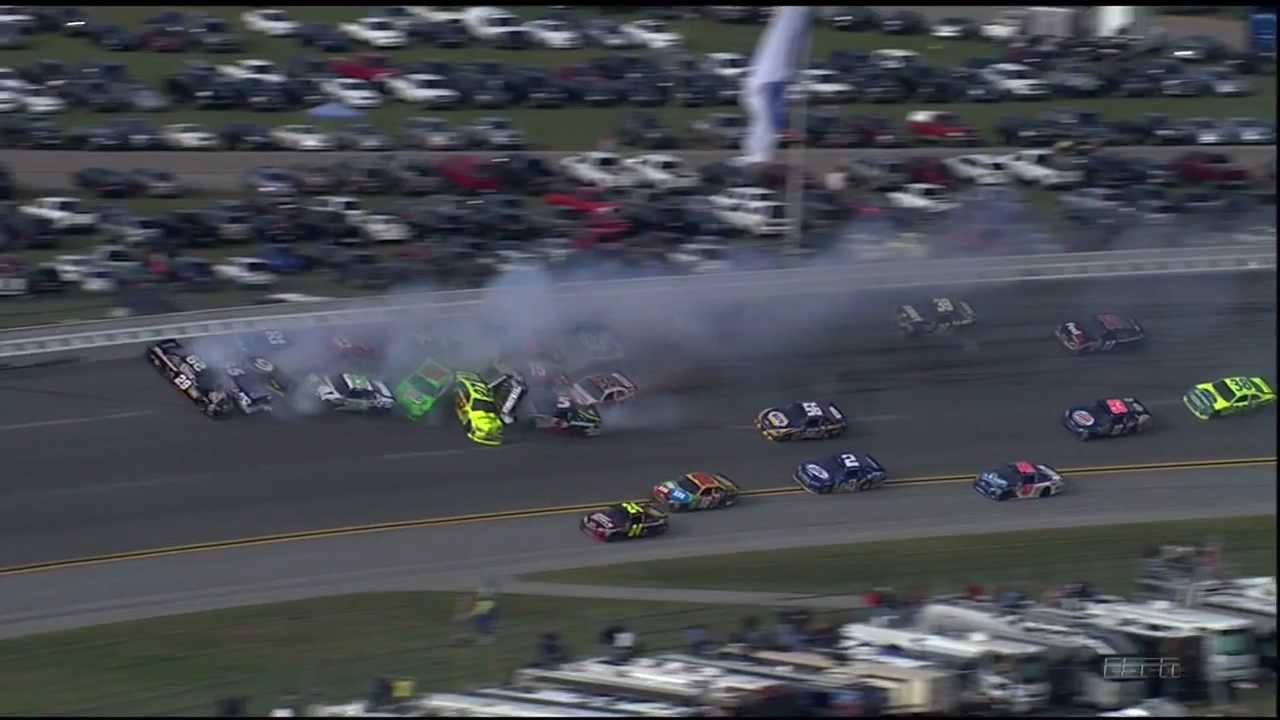 With a push from Sam Hornish Jr., Stewart used the outside lane to take the lead at the white flag, then worked hard to hold it. But Stewart’s attempt to block heading into the final turn led to chaos that eventually collected 25 cars. Matt Kenseth, who was battling Stewart for the lead, avoided the pile-up, cruising home for the win. Dale Earnhardt Jr. wasn’t so lucky; he suffered a concussion that caused him to miss the next two races.

Buescher did not start this multicar wreck that unfolded shortly after the halfway point, but he sure got the worst of it. Contact between Jamie McMurray and Austin Dillon set off a chain reaction which culminated in Michael Annett colliding into Buescher and sending the No. 34 tumbling down the backstretch. 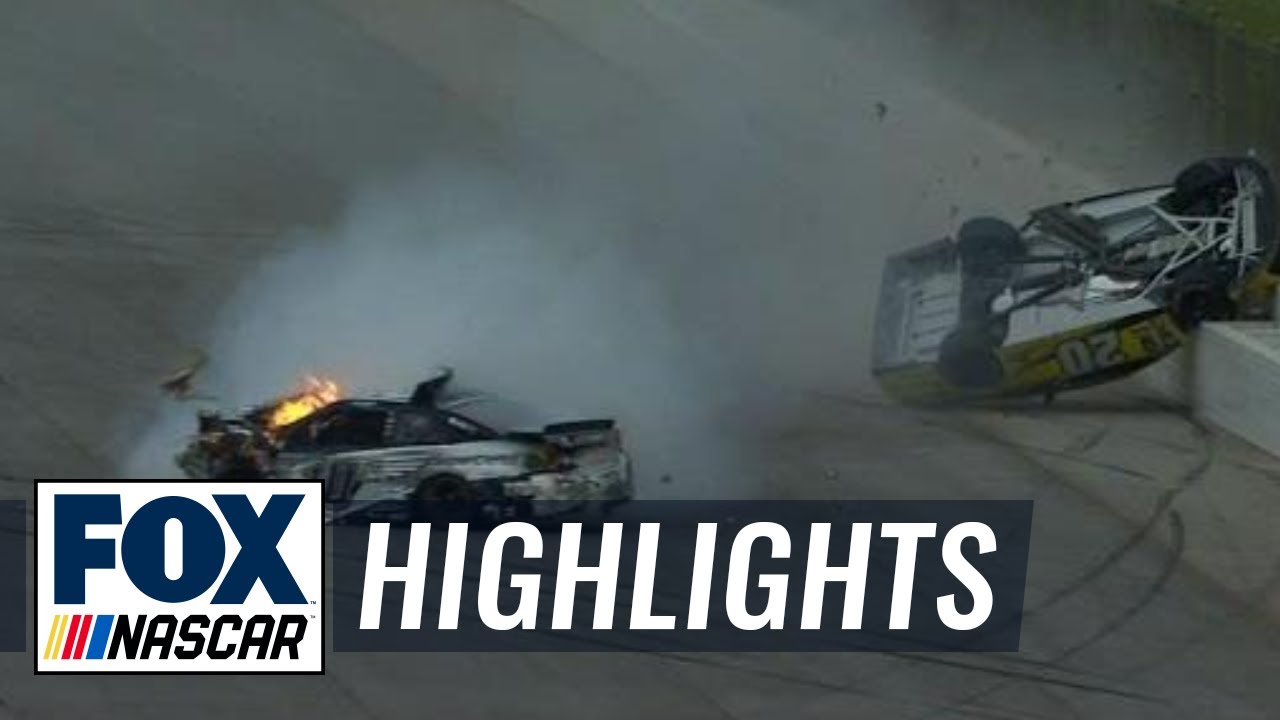 With eight laps remaining in the already wild race, Michael McDowell made contact with Patrick, who careened straight into Matt Kenseth. Kenseth went airborne as Patrick sailed under him and crashed hard into the interior SAFER Barrier and caught fire. Kenseth’s car just missed the infield catchfence before it landed on its hood and rolled to a stop. The two cars sustained the brunt of the damage in the 12-car wreck.

AJ Allmendinger and Chase Elliott in the 2017 GEICO 500

AJ Allmendinger took the biggest hit in this multicar wreck on Lap 170, which he actually initiated. Pushing Chase Elliott’s No. 24 Chevrolet down the backstretch, Allmendinger accidentally got him loose and sent Elliott up and into the outside wall, while Allmendinger got hit from behind, which sent him sliding. Elliott rode the wall and landed on Joey Logano’s No. 22 Ford, and the force of the hit sent both Elliott and Logano into Allmendinger’s No. 47 Chevrolet. As Allmendinger flipped and landed upside down in the middle of the track, more than a dozen cars were collected.

As the leaders took the white flag for the final lap of the April 28 race, David Ragan’s No. 38 Ford made contact with the No. 24 Chevrolet of William Byron near the outside wall, coming off Turn 2. Byron’s car spun back toward the track, sending the No. 42 Chevrolet of Kyle Larson and the No. 81 Toyota of Jeffrey Earnhardt sailing across the track into the SAFER barrier along the inside wall. Larson’s car got airborne just before it slammed into the wall and then barrel-rolled down the backstretch as NASCAR displayed the caution flag, giving race leader Chase Elliott the win. 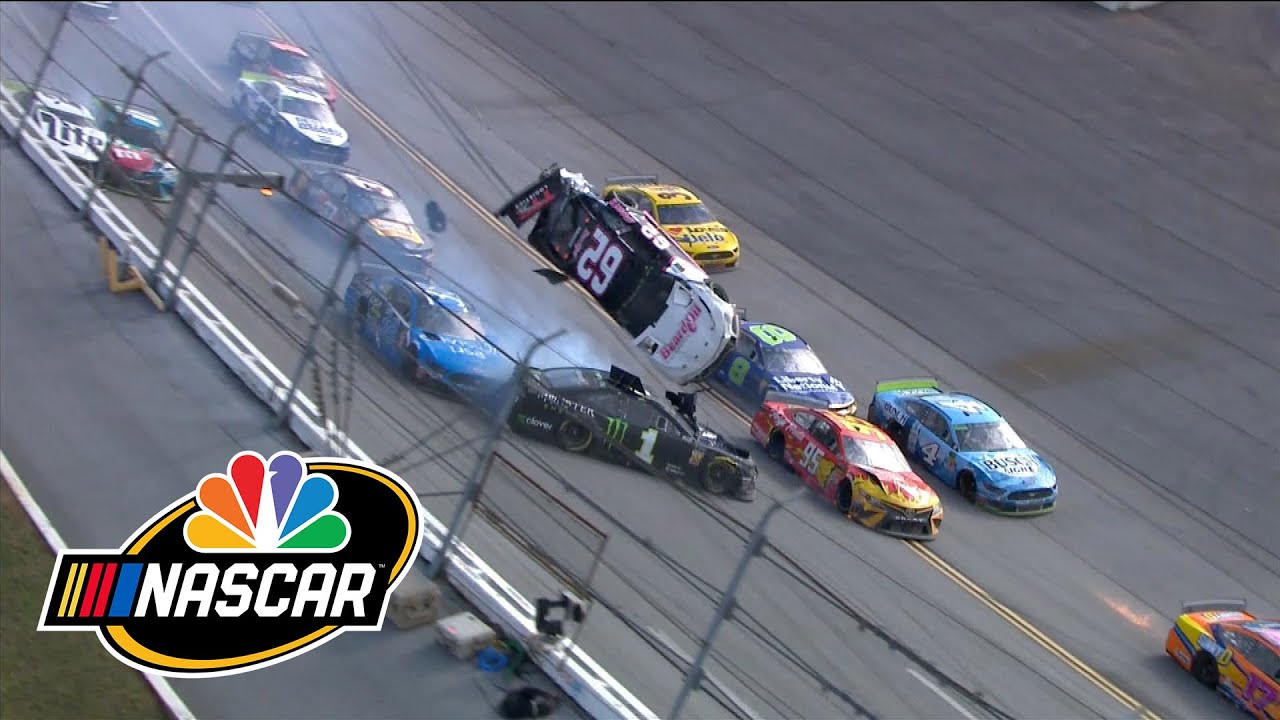 With less than 10 laps remaining in the 2019 playoff race, the Big One broke out at the front of the pack, leading to collisions, spins and flips throughout the field. Ricky Stenhouse Jr. and Kyle Busch made contact while racing for the lead, sending Busch careening toward the outside wall and the incoming Gaughan and Brad Keselowski. That contact crushed Keselowski’s No. 2 Ford and Busch’s No. 18 Toyota and sent Gaughan spinning into Matt DiBenedetto and Kurt Busch before his No. 62 Chevrolet went airborne and flipped over. In all 11 cars were caught up in the mayhem. 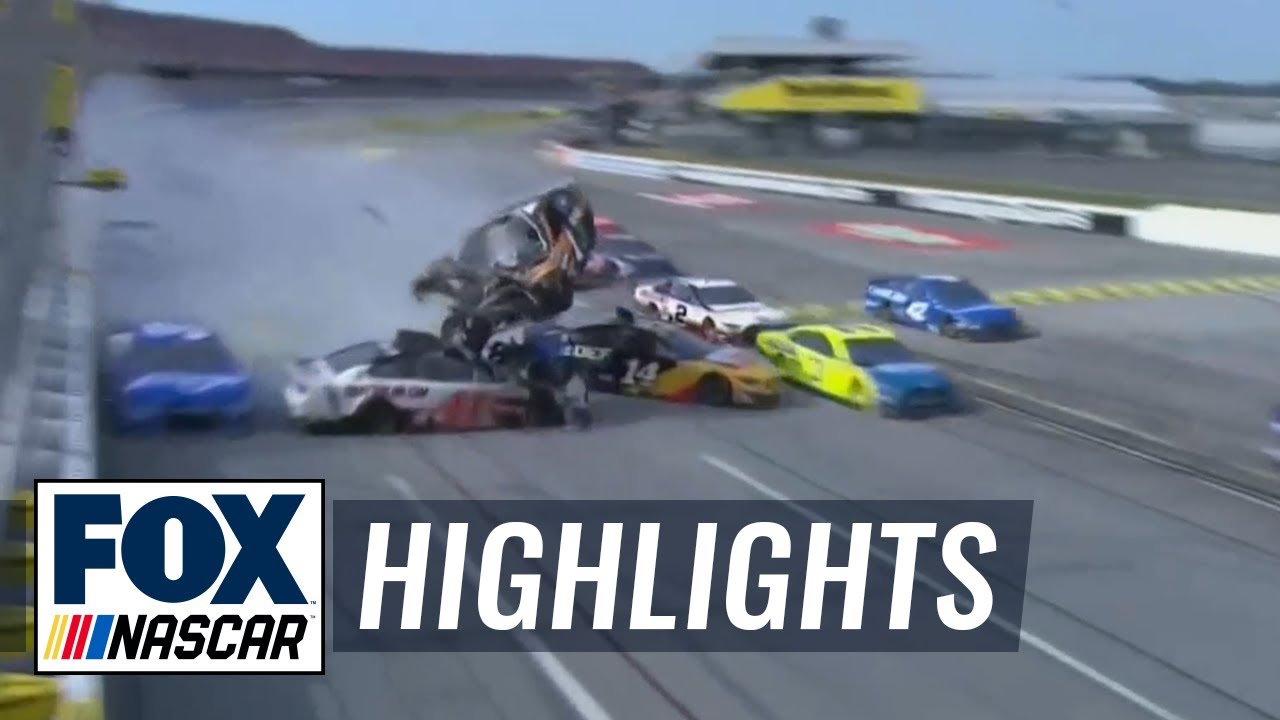 With 13 laps remaining in the 2020 playoff race, Kurt Busch bore the brunt of a 13-car accident that brought out the first of two red flags in Talladega’s longest and most wreck-filled race. As cars were pushing and shoving during the draft, Clint Bowyer’s No. 14 Ford got into the back of Jimmie Johnson’s No. 48 Chevrolet, which careened to the left and into Kurt Busch. That contact sent Busch and his No. 1 Chevrolet flying back to the right, straight into the outside wall, before he went airborne over Cole Custer’s No. 41 Ford.

The best Oscar dresses throughout history

Opinion: Bringing NFL regular-season games to Germany in 2022 and beyond could be rousing success

Football wives say NFL's race-norming 'most despicable,' but their power could change history

Will virtual onboarding for new workers be the norm post-pandemic? Some experts think so

New NASA chief doesn't think UFOs are an optical illusion, according to interview